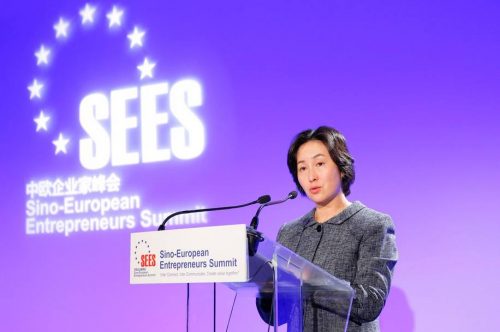 “Trans-Eurasia Logistics” Unaffected by the Pandemic
The event took on the theme “New Developments, New Opportunities, and New Economy: Co-Building a Belt and Road Platform for International Partnership” and brought to the stage Chinese and international leaders to share visionary insights into new opportunities in the post-pandemic economy.  Vice-Chairman and Secretary-General of the Global Tourism Economy Forum, Pansy Ho expressed, “According to 2019 data, the combined economies of China and Europe amounts to one-third of the global economy; the forecast for the two in 2024 will likely be greater than one-third. It’s evident that an increase in Sino-European cooperation can not only have complementary advantages to each other’s economy, but it can also inject positive energy into the global economy.”

The launch and success of the Trans-Eurasia Logistics is a prime example of how One Belt One Road has mutually benefited economic development for China and Europe. She states, “The Trans-Eurasia Logistics was not affected by the stall in global supply chain as a result of COVID-19 implications, in which many countries are still feeling its effects. In fact, its total amount of goods shipped increased by 41% compared to the same period the year before. This Steel Silk Road has paved a smooth and wide path for not only the efforts to combat the virus but also Sino-European cooperation moving forward.”

This year marks the 45th anniversary of China-EU relations; she cited President Xi Jinping’s speech during the 22nd China-EU Summit held in June of this year, “As two major economies, China and the EU should play the role of ‘dual engine’ of the world economy and drive the recovery of the global economy.” She also looks forward to actively promote cross-border, cross-cultural, and cross-industry communication to stimulate international trade coordination and cooperation through the international NGO, Sino-International Entrepreneurs Federation.

Macao: A Bridge for Sino-Europe Connection
In regards to Macao’s contribution towards Sino-Europe cooperation, Pansy Ho further pointed out that Macao’s GTEF is “a platform that has deepened and strengthened the cooperation of Chinese and European tourism industries. Since 2012, GTEF has received Spain, Portugal, France, the EU, and the 16 Central Eastern European Countries (CEECs), as well as Italy to be its Partner Country or Partner Region. GTEF acted as a platform to promote European tourism resources and investment opportunities to Chinese and global leaders from various sectors. Simultaneously, GTEF also acted as a platform to promote development and investment opportunities within China, including One Belt One Road and the Greater Bay Area, etc. to the European audience.” As the Vice-Chairman and Secretary-General of the Global Tourism Economy Forum, Pansy Ho has also led many delegations to visit various countries in Europe, as well as the EU headquarters and European Parliament; the delegation has met with leaders in both the public and private sectors to promote Sino-European cooperation in the tourism sector in efforts to lead Chinese companies to go global.

About Global Tourism Economy Forum
The Global Tourism Economy Forum (GTEF) is hosted by the Macao SAR Government, in collaboration with the World Tourism Organization (UNWTO), co-organized by the China Chamber of Tourism (TCC) under the authorization of All-China Federation of Industry and Commerce (ACFIC) and the Macao Government Tourism Office (MGTO), and coordinated by the Global Tourism Economy Research Centre (GTERC). GTEF’s supporting units include the Ministry of Culture and Tourism of the People’s Republic of China, All-China Federation of Industry and Commerce (ACFIC), the Liaison Office of the Central People’s Government in the Macao SAR, Office of the Commissioner of the Ministry of Foreign Affairs of the People’s Republic of China in the Macao SAR, World Travel and Tourism Council (WTTC), Pacific Asia Travel Association (PATA), World Tourism Cities Federation (WTCF), European Travel Commission (ETC), and the Macau Chinese Enterprise Association (MCEA).

Since its inception in 2012, GTEF has successfully established itself as an influential high-level cooperation platform to promote sustainable development in the global tourism industry with a focus on China. To date, GTEF had received more than 12,700 participants from 90 countries and regions, including delegations from 152 provinces and cities of Mainland China; and 600 internationally renowned speakers who are leaders in public, private, and academic fields. GTEF has continuously received consistent and wide amount of coverage from international press and media, valued up to USD $62 million.

Málaga Selected Global Headquarters for the Future of Tourism Coalition